So Nice of Tina to Write...

Tina, the Queen of Hearts at poker.com, sure has as an interest in my welfare. Else how could I explain this? 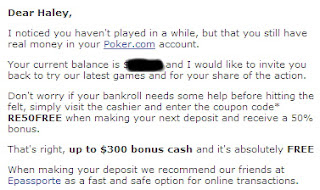 Even the online sites are noticing that I haven't played much poker lately. It's not that I don't want to, dammit... I mean, I haven't even made the Wheatie in a month, I've missed the last two KAP online league events, after running deep in the two previous ones, and as for the other blogger events, those are but a dream. I haven't even heard Lou and Amy's webcast show (or any of the other Hold'em Radio offerings) for a month and I always enjoy being part of the chat-room peanut gallery.

But I still get a kick out of mailings like these. Umm, that's a nice figure there that they chose to include right in the e-mail --- thanks a lot for that, poker.com --- and suffice it to say that I haven't forgotten about it; it's a good chunk of my online bankroll. I'm also going to venture a guess that Tina's never heard of me, much like the 'personal' letter I got from Mike Sexton last week begging me to join the PPA.

Ummm, considering I've got lots of money there and I'm still working on one of those sizeable, neverending re-deposit bonuses myself, why would I want to put even more money in there right now? I've got enough to play any of the ring games or tournaments that I'd want to, several times over. The rest of you, though, feel free to use the code. As for me, I'll just marvel again at software filters applied in a way-too-broad manner. You'd think they'd be happy with the fact that those funds are just sitting there in the virtual bank, generating virtual interest for someone who isn't me. But no, they want the rake, too.

I'm not cranky about this, by the way. I just think it's funny stuff. Don't worry, dear poker.com, I shant desert you.... 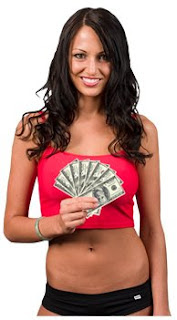 Seriously, I do like the poker.com guys, and I'm pretty sure they know that. Still, the 'loss retention' portion of modern-day marketing (which this is a part of) is somethimg I've never fully understood. Seems to me that if people were actually angry to leave something and move elsewhere, that throwing extra dollars at those customers is akin to sending good money after bad.

I remember getting a string of e-mails from a 'VIP rep' at Royal Vegas Poker a year or two ago, each inquiring why my play had fallen off so drastically or stopped entirely or whatever it was, and this was way before RVP said they wouldn't accept customers from Bouvet Island or wherever it is that I live. After getting five or six of these e-mails, I finally responded and listed the reasons why I departed, which basically amounted to the gutting of every value-added program for my price range that was available on the site. I used to multi-table the low-limit games at .50/1 and 1/2 and 2/4 there like there was no tomorrow, which one day turned out to be true.

So I sent that e-mail, finally. Never got a reply, nor a thanks for taking the time to respond. That alone might have been enough to win some return business. But I guess the personal touch on the RVP letters was faked, too.

Which tends to be a really bad thing. Just because a practice has widespread acceptance doesn't make it right, does it?
Posted by Haley at 11:12 AM