I consider A-Q to be the unluckiest hand in poker, or at least I'm cursed by it. I hate the hand, but there are times, particularly late in tournaments, that one has to go to war with it.

I'm of course on another typical run with A-Q, per my standards: Of the last 16 times I've played it for all my chips, AND gotten the chips in either ahead or in a race against an underpair, I've now lost 14 of my last 16.

PokerTracker tells me I've lost four times as much with that hand than with any other two-card combination, and it's simply a matter of just running dreadfully, dreadfully bad over a long run with those two cards.

But just so there's no mistake about my feelings.... Die, ace-queen!! Burn in hell!!

That feels better, thankyouverymuch.
Posted by Haley at 10:10 PM No comments:

'Tis true. I admit to being a bit superstitious.

It had been several weeks since I've been able to find a few hours free to join in a home game of any sort, but I found myself with an afternoon and evening more or less free on Sunday. I worked in the morning and knew I'd have something waiting for me late that night, but in between the two I thoroughly enjoyed watching my Packers* dismantle Da Bears, then headed up to McHenry, IL, to a private tournament I'd received an invite to earlier in the week. 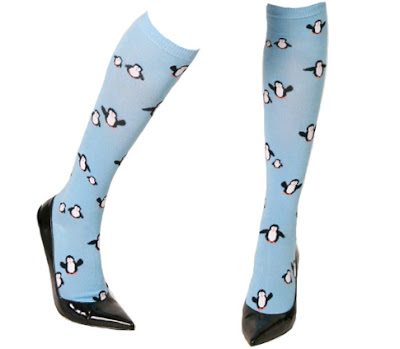 Yep, I wore one of my two pairs of lucky poker socks -- the powder blue ones with the little penguins. They're kinda like the ones in the photo, though mine are more anklets, not those calf huggers. When I'm wearing these and put a cooler on someone, I mean it literally.

Anyhow, ever hear of a 16-player tournament where the money was chopped five ways? That's what happened in this one. I was one of the five after getting a lot of chips early and then basically hanging around.

Problem is, one of the socks has a hole in the toe, darn it. Or not to. That's the question....


*"my Packers" meant literally, since I own a share of Packers stock. However, I'm unofficially and very personally boycotting all NFL merchandise as of right now, given the NFL's underhanded efforts to take away a game that I love. I don't bet on sports, but I won't tolerate the NFL's efforts to dictate or limit how I spend my discretionary income. I do hope they have someone who Googles the terms "National Football League" and "boycott" and someone reads this. Go to hell, Roger Goodell! And take your 24% merchandising and licensing fees with you!
Posted by Haley at 6:18 PM No comments:

It turns out that Microgaming isn't just turning down business from 13 US states (and the District of Columbia). They are geo-blocking them... errr... us, and that includes the corporate site as well.

Here's what a person in the 13 states sees when visiting microgaming.com: 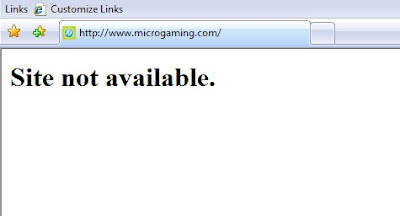 So, after visiting a couple of anonymizing web-surfing portals -- and discovering that I needed to delete a cookie or two from my own machine, since Microgaming is checking for those as well -- I found that by using the anonymizer, I could see the site just fine: 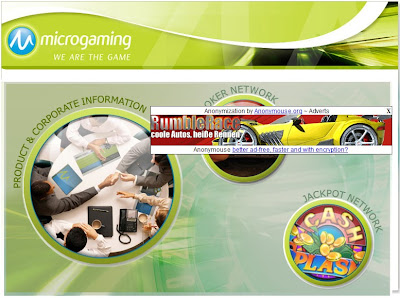 I'm pretty insanely pissed about this at the moment, this being the supposed land of the free and all, and since this is Microgaming's response to the KY domain seizure. What a fucking joke my country has become.
Posted by Haley at 10:59 PM No comments:

It's a lot faster drive to and from the NW Chicago suburbs and the Hammond Horseshoe at 2am than at any other time of the day. When I'd come over the first day I'd swung around the outside of Chicago on the Tri-State Tollway, but the eight-mile drive north to the shore turned out to be single-lane construction for half the distance, so since then I've been suffering the Skyway toll-bridge ripoff and rough traffic for the opposite trip and still coming out better on average. In the middle of the night, though, I did the 70 or so miles in, well... less than you might think.

I figured immediate sleep was a lost cause, so I worked on a couple of stories until 4am, then set my alarm for 8 am. But I tossed and turned and woke up for good at 7am, so I went back to work for a few hours, checking the headlines, working on site things and so on.

I had an interesting choice to make. I was scheduled to do a brief phone interview with November Nine member Ylon Schwartz at noon my time and I had to figure out how best to get it done. The more I thought about it, the more I realized that trying to do it from my place and then trying to rush over to a 2pm start would be stressful at best, and perhaps impossible if any sort of midday traffic tie-up occurred. So, I figured I had two options -- drive all the way over to the Horseshoe and do it from there, or drive around on the Tri-State again and look for an oasis with wi-fi service. I have a ham-radio quality headset and the software for recording VOIP calls, so the problem was to find decent enough service.

That's the plan I went with, as it turned out. Though, dear Ylon, if you ever read this, your interview was done from the South Illinois Tri-State Tollway oasis, with complimentary wi-fi service provided by Progressive Auto Insurance.

I'm pretty sure I couldn't have imagined that combination of circumstances ten years ago.

I even had some old fart come by after I was done to ask what brand of headset I was using. I must have been a sight. As to anyone wondering why I didn't go ahead and drive over to Horseshoe and do it from there, it had more to do with the rigors of checking in and out from security. All the business visitors there, including dealers and staff, received the same sort of small "Visitor" clip-on badge, and there is a very strict rule about not gambling while one of these is in one's possession, or even appears to be in one's possession, having been issued. There's an entire "Time In / Time Out" check-in procedure to go through. Unclipping the pass and going over to a table to play would be a pretty whopping big no-no. So I didn't want to risk any type of situation at all, and opted not to be an official press person at the Horseshoe on Tuesday or Wednesday during the duration of my play.

I negotiated the crummy construction zone again and got up to the "The Venue" venue about 1:30. The few other players who were there and I all agreed that it was a crapshoot at this stage, with such a low average "M" (around 3 or 4, if you figure out some way of computing it for the stud games), that it was just a matter of cards now. I knew I'd need to catch a double-up early to have any sort of chance at all.

We started with our remaining three hands of stud hi/lo, and I saw three more hands to match the unplayable stuff I'd finished up with the previous night. After just one more hand of hold'em, we'd lost two players to move down to 16 and another redraw and game draw, and we jumped over hold'em and Omaha and went to razz. We also moved to the two tables just below the stage, while the final table in the previous day's first event was underway up above.

The glare was awful, due to the angle of the stage lights above us, and it turned out we were just there temporarily as they put the chairs in place around the other two tables up on the stage, where we'd soon move again. "Temporarily" equaled one hand, as it turned out.

We grabbed our chips and moved again, up the stairs. I was sort of glad I didn't have one of the deep stacks, for all the reracking going on.

For most of the players up there, playing poker in a stage or studio setting was a first-time experience; I'd been through it once before, so I wasn't bothered by that part of it. All I needed was a hand good enough to lose with, but I kept getting worthless rags that I couldn't even play. The entire rotation of razz passed by and I never saw anything. One time I had an ace up; the first ace was to my right and completed, and I looked underneath and saw K-Q. One time I saw a deuce (but with both an ace and a three to my left), and underneath I had pocket queens. Other than that, nada.

We moved into stud and I'd been whittled down to 17,600 against my own will. We'd lost another player by then, putting us at 15 and up one spot on the pay scale. Then I was dealt an ace up in stud (hi only), and a player with a six up three seats to my right completed. I peeked and saw another ace underneath, though I would likely have reraised here anyway. I was all in by fifth, and I made aces up while the original raiser doubled me up after not improving on his starting pair of sixes. I swiped two more pots in the stud round, one after completing with a split pair of tens and getting no callers, the other with a jack up and ace-seven underneath -- true crap -- that the bring-in called but gave up on after catching a second rag on fourth.

I'd snuck back up to 43,000 as we entered stud hi/lo, which had been good to me the entire previous day. Could I make it work again?

Not in these eight hands. A steady diet of nines and tens and jacks for up cards, though I did keep dodging the bring-ins. We did lose another player, but I was down 8,000 just on my antes.

We jumped another level just as we moved back to hold'em, so instead of a 1,000 ante in the stud games, I caught a round of blinds and had six more hands of crap. Raises in front of my button and cutoff and ugly cards precluded a steal attempt. It was my big blind again, with 27,600 in front of me, when I squeezed and found a pair of shiny red aces. Across the way, Doug Lorgeree, a funny and good-natured guy from Mississippi that had gone on a rush, looked at my shrinking stack from the cutoff and made it 10,000. I gave it some pretend thought, then made it 15,000. Doug called.

Flop 8-9-Q. I bet. He called. Turn was a ten. I hate it, but I don't even have a full big bet remaining so I push in my remaining chips. If he has a jack, so be it. He's calling me down here with any pair, to be sure. And as expected, he called.

He didn't have a jack. He had 7-6 off for the turned straight. I had four outs to the chop but the river was a queen instead. My aces are duly cracked and I'm out in 13th, for $984. I get the handshakes and compliments and all, but out is out. I could have waited for one super-short stack at the next table to bust, thereby giving me another $133 jump in pay, but I wanted to final-table that thing. If it wasn't going to happen with aces, it wasn't going to happen.

There's always next time, right?
Posted by Haley at 4:43 PM No comments: