Once in a while, something occurs that reminds me just how amateur so much of the "poker media" is. I wrote about it a hair more at my blog over at PokerNews, but either way, I found it disappointing, and it's one of those odd lasting memories that will likely stay with me for a while.

Several times during the conference, other poker writers in attendance broke out into brief rounds of applause, either as speakers were introduced or when important talking points from the conference were delivered. (I won't name names, so don't ask.) Each time it happened, I stared around at those doing so with a look of absolute incredulity. Were they for real?

It's not my job to cheerlead when I'm covering these things. It's my job to get the facts and report them. It doesn't matter what my personal beliefs are; it's my job to check my own opinions at the door.
Posted by Haley at 1:57 PM 1 comment:

Somewhere in the introduction to one of Stephen King's books, King writes about going for certain visceral reactions. I'm paraphrasing him here, because whatever book it's in is about 2,000 miles away, but he wrote that the terror of a true scary moment is best, and then there was always the shock factor to shoot for, and if that didn't work, he wasn't too proud -- he'd try to gross the reader out.

Along with a lot of other folks out here at the WSOP, I've been battling a rough virus for the last few days, one that's putting up a much stronger battle of its own than I'd hoped for when it first announced its arrival. I thought I was over it around Wednesday, coughing and sneezing up a few of the aforementioned creatures, one of which must have been three inches long when it landed and started to harden.

But, when Thursday morning rolled around and I snorted out a neon-green ink blotch, I went hunting for the nearest walk-in clinic or urgent care center or what have you. I finally found a "doc in a box" in a strip mall just off of I-215 West, and left with nothing for the virus itself but some Cipro for the sinus infection and some nasal spray for the allergic rhinitis that might be making things even worse.

"Swine flu!" I joked at Doc Bocks, though I knew it wasn't. I know how flu hits, and this ain't it. He didn't think it was quite as funny as I did, but I was the one paying for the audience. His cooler, if you will.

So far, recovery-wise, it's three steps forward and two steps back, and I suspect it'll be a couple more days before I return to full health. Lots and lots of folks at the WSOP are fighting this bug, and I suspect that Justin Smith was one of them, when I saw him sprawled across his chips at his Stud/8 final table today, looking for all the world like he was trying to save whatever energy he had. One of the WSOP dealers I know told me that it's a nasty bug that's been making the rounds for a few weeks.

Or so they tell me I'll be, when I venture out to Commerce next spring to take part in the WPT Celebrity Invitational. I blogged about it a bit in my 2009 WSOP "Editor's Blog" available at PokerNews, which is where I'll be throwing up many of my idle/random thoughts the next several weeks. There are two or three funny tales from the first portion of the WSOP already in that blog, so stop on by. More here soon as well, now that the WSOP is in mid-stretch and everyone has hit their stride.
Posted by Haley at 4:43 PM No comments:

So I'm a bit superstitious. I have a two-sided Bodog card cap (my favorite of the three I carry and use), which I occasionally flip from red to black as I play to try and get out of a bad run of cards.

Once in a while, perhaps once a month, I'll look through a stack of bills I receive and see if there are any interesting serial numbers, for potential use in dollar poker or some other shenanigans.

This morning I went to fetch some hundreds out of a lockbox I have for paying for this Sunday's $1,500 HORSE tourney. The first bill I looked at, as photographed a little while ago by F-train: 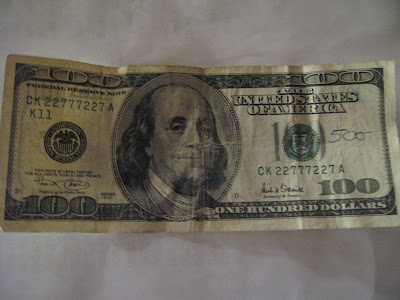