Back today with a new and lighthearted JC installment, a bit of a break from the heavy stuff in many previous posts. This time out it's a look at a tangential tale from the greater UB world, about a Costa Rican burger joint with a heckuva big UB connection, and a story shared just because it's entertaining.

Percell, a Colorado native, worked for both UB and UBT (the Ultimate Blackjack Tour) at various times and was among several UB office workers who migrated to Costa Rica when the company relocated much of its customer-service operations there. And it was there that he fell in love with a tica, a Costa Rican girl named Milenna Perea, and as the two shuttled back and forth between CR and the States, they pondered opening an upscale burger joint in Costa Rica, targeting in large part, Costa Rica's sizeable US expat population.

Percell left UB not only on good terms but perhaps with, as it's been rumored, some UB-related backing. Percell and Perea pinched pennies to open up shop in Costa Rica, no shame in that, and if there was a UB backer, it might have been the UBT's Joe Pane, a former NYC cop who retired to become a professional blackjack player, a career transition for the ages. Pane and Percell were known to be good buddies around the UBT offices. (Pane, interestingly enough, showed up on the red carpet for Dan Fleyshman's Ksino/Victory Poker bash a year or so ago, before that site's aborted transition to the Cereus Network and subsequent folding of operations.)

Anyhow, the burger joint Percell and Perea opened up was called Doc Brown's, and it paid homage to its UB beginnings in its logo: 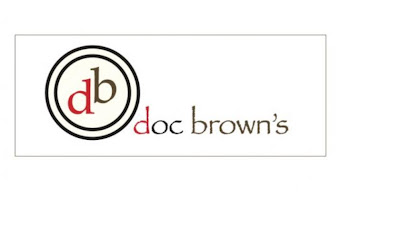 For comparison, here's the UB logo from the same era: 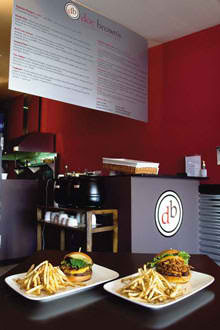 I guess the burgers were pretty darned good. If I'd been working in Costa Rica at that time, it's a good bet I'd have been one of the place's customers.

Update: For what it's worth, Joe Pane subsequently contacted me and denied being a shadow investor in Percell's restaurant, though he did acknowledge being good friends with Percell. Pane hasn't shared anything else about his UBT days, though I've made it known I'm willing to listen to his tales. The UBT? Lots of stories to share on that count.

I've noticed today a couple of new news items referring to Ben Mezrich's upcoming effort on Absolute Poker. Mezrich's the one-time member of the fabled MIT blackjack team who wrote about that experience in the book Bringing Down the House (which I own), which later became the movie 21, which I've never watched.

This paragraph from a news story made me chortle:

When asked what he was working on, Mezrich said, "I'm working on a big new book for next summer about a bunch of college kids who launched the online poker world out of a dorm room essentially. They're brilliant kids who built an empire in a way, and now they're being persecuted, in hiding in Antigua, because they did something to me that was very American. It's an intersection of 21 and The Social Network." -- quote excerpted from a crap poker site that I rarely visit.

Persecuted victims? Okay, Ben, whatever. I'm gonna guess his book and mine will have starkly different viewpoints, though I do understand the sympatico he might feel for the AP fratboys, given his own start as part of a team that ripped off casinos. That deserves an explanation, too. I'm totally in favor of advantage blackjack players being allowed to ply their trade, but the complex systems employed by the MIT kids and their backers were a systematic fraud, romantic tale that the story may be.

This book could be worse than the falsehood served up in BDTH, since portraying the AP core founders as victims is a goddamned farce, and I say that without seeing one word of whatever it is that Mezrich plans to write. I do note that he's not off to a great start, since the AP boys did not found online poker, nor were they responsible for what triggered AP's rapid growth phase. That idea was Mark Seif's.

I had thought on first hearing the news that the behind-the-scenes collaborator would probably turn out to be early AP poker-room manager Gian Perroni, who tried to pitch a concept for a book called Folding the Absolute Nuts a few years back. I was among those he pitched it to, and I turned it down. I'm no longer sure this is Perroni's baby. It could still be a Perroni/Mezrich package, or it could be some of the fratboys themselves, or even Phil Tom, who spewed very similar nonsense to me in a lengthy phone interview/argument a few months back.

Whatever, my best to Mezrich, though I don't respect this concept as he's promoting it. I'm sure he'll sell lots of books. I'd rather get the story right.