Funny is Where You Find It

Among the elements of my daily grind is a sweep through Google News for items related to poker. I noticed this just today, as Google's compendium of popular search terms connected to poker:

If that's really the top six, words fail me.
Posted by Haley at 9:01 AM No comments:

And Off to a Sunday Million

While I've been a bit preoccupied of late, and have therefore missed two of the four WBCOOP qualifiers so far, there were the other two. In the first one, I ran well early and survived to get that Step 3 ticket, as mentioned last post. In the second one, I ended up at a table with both Irongirl and Bayne, but none of us seemed to be in much of a chatty mood. I was catching up on the news while playing, which semi-sorta explains my quietitude.

Not that it mattered. A Eurodonk -- :-) -- ran over the table, catching every draw, and I was out soon enough. The eight-game mix is today and I like my chances in that against a random selection of bloggers, anyway.

But, there was the matter of that Step 3 ticket....

After crashing out of the WBCOOP heat, I decided I'd give a Step 3 a whirl. I registered for one that had seven seats already full, and yet it still took another ten minutes for it to fill. Might it have had something to do with the lineup already seated?

Mayhap. I need to pay closer attention to that in the future, but in the short term, I'm stupidly willing to mix it up against just about anyone. After all, the cards can run well.

Two seats to my left I had "THAY3R" (Thayer Rasmussen), and there were two Stars Supernovas in seats to my right, plus two other screen names I recognized and suspected were also Novas or Supernovas, but like Rasmussen, were just not showing their accolades.

Steps get tougher up the scale, and they show a couple of distinct trends. The action tends to be slower early on at the higher steps, but once the blinds build a bit, it's war, with a lot of bluffing and aggro play.

Case in point, THAY3R. He was not one of the two who jumped out to early advantages once the first couple of wars finally unfolded; nor was I. I play the Step 3's a bit different than the 1's and 2's, because in the Step 3's the top two move on to Step 4, while spots 3-5 return to Step 3. So in my mind the Step 3 becomes a very reactive sit-n-go, wherein if a couple of players are willing to donk themselves out early, it's not necessarily a bad EV move to consider playing for the renewed Step 3, and hoping for a freeroll for the top two spots and the Step 4 ticket. Besides, perhaps you'll be one of the fortunate recipients.

I'm also a believer in first impressions. Against presumed tough opponents who probably have marginal records of my play, I don't mind folding in some crap spots early if it makes others think I might be overly weak-tight. I am a bit weak-tight by nature, but I consciously let a bluffer type two to my right swipe my blinds twice while also folding my button twice (also with crap) to THAY3R's big blind. Sometimes, after all, a plan comes together.

Unfortunately, none of the players wanted to go out early, and a pre-flop raise usually took down the pot, right from the outset. I didn't see much for cards early, and as I said, the situation didn't warrant pushing it. Soon enough, though, two players had been bounced while two others moved up to around 3,000, with the others, me included, all bunched between 1,300 and 1,700.

Then Rasmussen tried an all-in steal from the small blinds, with the blinds at just 25/50. He got called, by the big blind, one of the two leaders ... who showed K-6 off. Wow at that call. Wow again when it turned out he was ahead to Rasmussen's Q-5. Rasmussen, however, caught a five to double through to the lead.

Think he slowed down? Nope. With the blinds not yet even at 50/100, everyone was opening by jamming the pot. Into what type of aggro-fest had I stumbled?

The pushes kept coming. It turned out that the aggro switch had been tossed in four straight players, starting with Rasmussen's seat, and even though we were still at seven, the chips were going in light. Very light. Rasmussen got caught again on another pot-buy (one that seemed unnecessary to me), when he tried to pilfer with 10-5 or something similar and gave back half his stack.

I wasn't seeing any cards anyway. Didn't mind watching it to see if carnage would develop. Still, while there were three or four collisions, the short stack kept winning, and ten or twelve minutes later I'd paid another round of blinds and we'd only lost one more player, and we clicked over to 100/200.

Well, I'd been patient long enough. You can't back into the pay spots against this level without taking some risk somewhere, so when I found a suited A-7 from the cutoff, I jammed with it. Folds all around. I'm happy with buying the blinds, of course. The next hand I find 9-9 and do it again, and again it's folded around.

I don't care -- my stack is near 2,000 and a couple of players are down around 1,000 and 1,200. If one of them goes away, my Step 3 refund is assured and I'm freerolling. Meanwhile, the player three to my right seems to be out-aggressing even Rasmussen; he's in there way weak twice, and manages to win to move out to the lead. I'm thinking that all I need to do is catch a wonderful hand and have it hold up....

I jam. Seems like the money play if someone is getting suspicious of my newfound swiping ability. Rasmussen calls with A-Q... essentially, just what I wanted. For once, my kings hold up. THAY3R's gone and I'm in second in chips.

But this guy just keeps shoving, and he manages to double up himself and swipes enough blinds to stay around. He's still there when we're down to three, and while I've lost 1,200 despite getting it in good against a short stack, I'm still ahead. Second place is to my left and has about 4,600; the aggro player has the rest. We're finally up to 200/400.

My big blind, and he shoves on me. I have A-4 of diamonds. Not much of a hand to call with, but this player hadn't shown an off switch yet, so I call real light. And... he's in there even lighter, as I'd guessed, with K-4. My hand holds up again, and we're down to two. It's a Step 4 ticket for me... meaning a regular-entry Sunday Million at some future date.

Had a couple of hours to kill Monday afternoon so I fired up the first WBCOOP event, which was PLO. It's perhaps my weakest game, but it had a great entry fee -- free (thanks, Stars!) -- so in true what-the-hell fashion I gave it a go.

I had some good cards early, getting it in ahead a couple of times and having the lead hold, and then I just kind of worked it in toward the guaranteed seats, which were the top 72 out of something like 460 entries. We were almost there when I realized that we were actually playing for more than just qualifying seats for the final; there were some pretty nice prizes for the final-table players, in particular.

I didn't make it that far, bowing out in 24th at the hands of this dude. He'd better win after sucking out on me to bounce me, not that I had any chips left at that point. Go get 'em, Tom. I also saw that I was being railed by this blogger late, who I'm not sure I know. But in any event, thanks for the rail. I'm happy enough with the Step 3 coupon and the guaranteed seat in the final.

Hunting for My Mojo

Totally gone at the moment. Managed to catch K-K three times in the space of 20 hands in separate MTTs and SNG's last night. Got it all in pre-flop all three times, was up against aces all three times. Sheesh. Worst month ever by a wide margin, and the run shows no signs of breaking.

Another 0-7 in 90 minutes of supposed fun time, re: Stars turbos. The one-outer when I got it all in with kings against jacks and a third player folded A-J was just the coup de grace. Elsewhere, A-J went down in flames to A-4, 10-10 never had a hope against 5-5, and A-Q went another 0-3 in forced races... except the time I went against it with 7-7.

You hear me, Stars RNG??? I'm coming after you with this thing, you miserable pile of electron carriers: 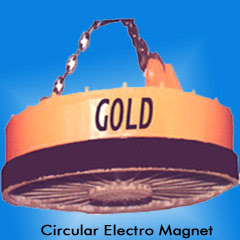 This happened 60 seconds after I clicked "post". I don't really need to recount the action, do I? I'll just let the picture tell the story: 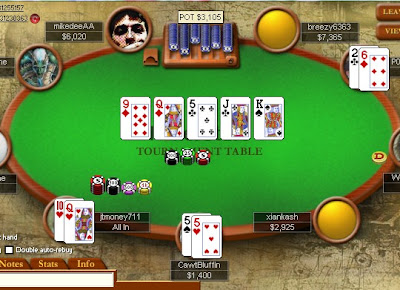 The Odd Thing About This Game

...is that when you think you've seen the best and worst that variance can bring, the game itself says, "You ain't seen nothin' yet."

Just as I ran ungodly well this summer, I'm now running ungodly bad for the last month. Won't describe the beats, of curse, but the sheer number and frequency of them is beginning to tilt me to the point that it's affecting my game.

It'll break. It always does. The problem is that I just feel... lost... right now. Whatever I try doesn't work, and posting about it isn't a barrel of monkeys, either. Thus comes the definition of "running bad".

Depressing. I always get a bit blue around the holidays, too, so this sort of fits the general mood.
Posted by Haley at 10:19 PM No comments: