Just Conjecturin', Volume 37: The Clown Prince, err, Chairman of the Board

Time to return to the tales of AP and UB with a lighthearted look at one of the more public (and kinda pathetic) persons of the whole AP affair, one Philip Scott Tom. He's Scott Tom's daddy, and he figures in a whole bunch of entertaining stories, some directly connected to the cheating at Absolute Poker, and others not so much.

Phil Tom, as he's more commonly known, is quite the star unto himself, if you get my drift. As I hinted in a Twitter post a short while back, he might be capable of giving Doug "Toolbox" Lee a run for top toolbox honors, if Lee hasn't all but retired that honor years back.

While I'm saving some of the more serious Phil Tom stuff for the book, let's all share a moment or two and savor the man's self-aggrandizement. This is man who was the self-styled "Chairman of the Board" at Absolute Poker, and he indeed held that title, though he was wholly unsuited to the task: his alleged job duties amounted to showing up once a year to chair AP's annual board meeting, and then spending all the money that came his way.

One of the tapes I have includes a pointed conversation between AP shareholders and management bemoaning Phil Tom's negative effect on other AP executives' ongoing efforts to attract new investors, with the complaints generally categorized as having to work around a drunken Phil Tom always showing up at meetings with a hooker hanging on his arm. One need look no further than Tom's Facebook page to get a feel for his party-hardy lifestyle, and paying for it was always a big concern. Said one Vegas veteran to me, "Phil Tom is the greediest person I've ever met."

I can't vouch for that from personal knowledge, but there's plenty of evidence he's one of the most vain. Phil's way, way proud of his WSOP bracelet win, enough to have launched a site immortalizing it at thechairmanofpoker.com. Yep, that's the nickname ol' man Tom has chosen for himself.

Tom's got himself a nice sister site, which appears at lakeshoreopen.com, and details a bit of what he's done with his upscale Vegas home in the Scotch 80s neighborhood, which is kind of across I-15 from the Sahara. Ignoring the pool and the basketball court and all the other stuff paid for with AP money, Tom's love of golf led him to create something of a mini-golf course around his home, though one that uses real wedges and golf balls, wielded judiciously. You can read all about it here.

Now, about that "Chairman" thing. Seems the old Casa Tom used to boast a whole lot of giant AP logos, so all visitors to the place could be impressed at how Chairman Phil made all his money through this up-and-coming Absolute poker site, which was likely the fastest-growing US-facing site in percentage terms from 2004-06. Not due to Phil's contributions, of course, but in spite of them, according to other insiders. Phil was so proud of that diamond-shaped "AP" logo that he wanted to make it an endemic, instantly recognizable photo -- even without the "AP" letters on the inside. But using it with the "AP" was still good, and so he did, in several spots inside Casa Tom, and in big bold paint on the basketball court, which you can see in this historical photo from Google Earth archives, circa 2006. (Hint: Look at the lane on the west end of the court.): 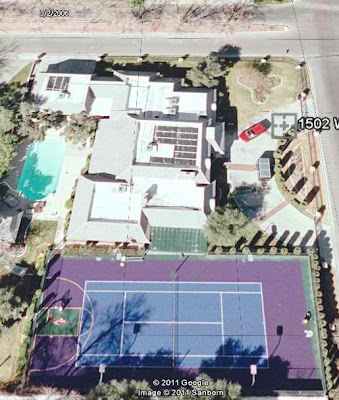 Now the same shot, from a 2007 Google Earth satellite overpass, perhaps the same one Tom uses on the left side of his own LakeShore Golf page: 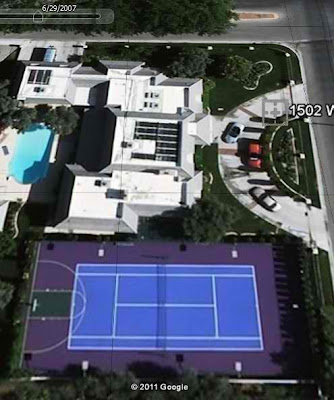 Look ma, no AP diamond. The big "AP" was painted over some time in late 2006 or early 2007, probably just after the UIGEA became law. Few people understood in 2006 that satellite photos are a bit like tattoos. They'll be around forever, so Phil Tom painting over the logo is understandable, if fruitless and more than a bit funny. It's even thinly possible that Phil's college friend and one-time housemate, Brian Coffey (who worked in home improvement) could have wielded the brush.

But more vain, more funny, is that Phil Tom is still today trying to create this "Chairman of Poker" persona while trying to cover up and destroy the very same AP history that might have given credence to the handle. That's not only chutzpah, but a cheap brand of chutzpah that you buy off the Wal-Mart shelves. His site shows a copyright date of 2010-2011, and one wonders what content he's trying to protect by his disclaimer at the bottom. All that stuff originated on other sites; it's not his, even if he's unlikely to get much heat from the rightful owners.

Phil Tom's connection to the story has more to do with an exploration of where the money went. Way back in 2007, during the height of the first wave of known AP cheating, there was a blatant transfer of $10,000 from the "graycat" account to Phil Tom. Odd thing: the Graycat account was Phil's, even though Scott was controlling it as part of his cheating and laundering of funds. And yet the $10K transfer to Phil stands unedited in the history: 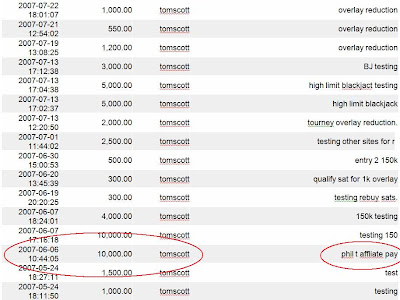 Referring to yourself as the Chairman of Poker? That's a lot of chutzpah, indeed.
Posted by Haley at 9:19 PM No comments: