"Dodo is a former UB employee. He was a $4 hr CS agent with a brain. He knew he had the goods to blackmail. He went to AP first and they said so what. Go tell. They didn't realize what he had. He is being paid off now, which is why you haven't seen any more." -- Source withheld

One of the most intriguing episodes in the annals of the UltimateBet scandal was the appearance on the 2+2 poker forums in late 2007 of a poster named "brainwashdodo", a poster who shared, via screengrabs and anecdotal tales, a tantalizing helping of inside information connected to the cheating. Information posted by brainwashdodo at the time was vital to the wronged poker players' investigative efforts in covering some of the user accounts and possible money trails used in the scandal, and in fact directly contributed to the uncovering of Russ Hamilton himself. Hamilton may well have been outed via other lines of inquiry that were also underway at the time, but the information brainwashdodo provided all but removed any doubt in the matter.

What was perhaps most intriguing, however, was that brainwashdodo himself disappeared from the scene, as abruptly as he first appeared. Even stranger was that many of the screen grabs this poster served up on a file-sharing service were quickly deleted as well, leading onlookers to question brainwashdodo's motives in posting about the matter in the first place. Brainwashdodo posted 14 times between June 30 and July 8, 2008, disappeared for almost five months, then served up three more quick posts on December 2, 2008 before vanishing forever into the electronic ether.

Here's a quick visual overview of brainwashdodo's posting history on 2+2. [While the forum's owners retain proprietary rights to content in its entirety, the nature of this tale involves 2+2 itself, and because there is another part to this, these images fall under "fair use" for editorial purposes.] The list is presented in reverse chronological order (most recent posts at top), and clicking on any of these images should bring up a larger version: 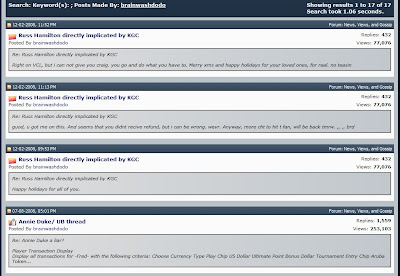 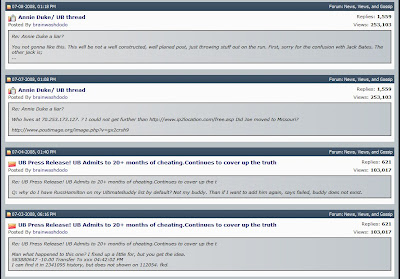 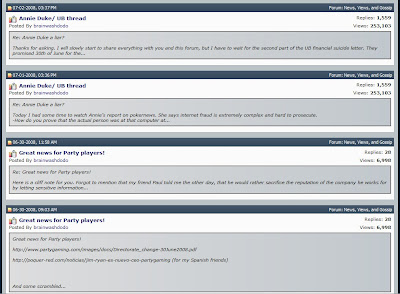 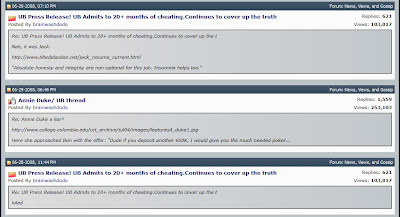 Brainwashdodo's final December posts on 2+2, in fact, were little more than a wish for happy holidays for posters amid what might have been a veiled threat: "Anyway, more cht to hit t fan, will be back tmrw." In a July post, with much more gravitas, brainwashdodo had written this: "Out of curiosity, I have started my own audit within, since I saw no KGC or any other investigator coming or going. All the results will be shared with you soon, a website is coming together." However, Brainwashdodo's first series of posts ceased that very day, and after the no-new-information return in December, brainwashdodo never posted again. The hosted images were long gone as well, with nothing more than unreadable Google thumbnails to hint at the account information that once was opened to all.

It was in those earlier summer posts, of course, that other hard information was presented, with scathing and lengthy account-transfer histories that directly implicated Russ Hamilton at the heart of the cheating scandal and to many of the accounts later included in the Kahnawake Gaming Commission's "official" final report on the matter. Those histories had been posted in text format on 2+2, an independent site, and were thus no longer so easily removed. The transfer and play histories ran many hundreds of lines and included entries such as these, taken from an internal transfer account called "-Fred-", which was allegedly solely controlled by UB employee Fred David, but which was in fact under the direction of one or more top-level UB people, including Russ Hamilton. A second internal transfer account, "-russh-" (standing for Russ H[amilton]) was also directly tied via the -Fred- account to many of the proven and acknowledged cheating accounts, in transactions such as these:

The reason the -fred- account was used is that it was already a familiar account internally for high rollers to swap money back and forth for big games. Many of these big players were and are peripherally tied to the scandal despite being wholly innocent of the cheating. Since the -fred- account had lots of high-dollar swaps running through it, it would have served well as camouflage for similar-sized, illegitimate transfers. These transfers to cheating accounts were done amid this larger sea of far more legitimate swaps, which were done to help get big games running. It's possible, perhaps even likely, that the majority of the cheating transfers weren't done through the -fred- account at all, but rather the -russh- one.

These transactions first appeared via brainwashdodo's posts, and brainwashdodo himself disappeared within days, all but without a trace. So what was up with that? The comments in July about doing a personal audit implied a good motive, but the subsequent removal of associated screen grabs and the veiled threat in December -- "Anyway, more cht to hit t fan, will be back tmrw." -- instead lent credence to the blackmail theory, the one since confirmed by a confidential but proven source. It's been alleged to me that brainwashdodo was paid off, for some $80,000, by an important figure long since implicated in the matter. Brainwashdodo has even been reported to have made a second, more recent attempt to obtain additional funds for remaining quiet.

Brainwashdodo's real name has been provided to me, though I'll refrain from publishing it here on the very slim chance (perhaps 1 in 1,000) that the blackmail tale, though reported to me with specific names, was somehow altered along the way. It's not the only such tale to come out of the UB and AP messes, though the others can wait for future telling.

As for brainwashdodo, it's easy enough for a 2+2 owner or moderator to do a quick IP check and verify that the account did indeed post to the forum from somewhere in Costa Rica. This actually wasn't my first guessed location for the account, though I suspected all along the posting was done with less than altruistic motives.

Though the money involved may not seem like much, the brainwashdodo episode deserves a historical footnote. It will likely go down as the first time that a poker forum (2+2) was itself used as a tool of blackmail. Such a revelation should be of interest to 2+2's owners and to interested followers throughout the poker world.

Amazing. You should make this a book.

I've enjoyed reading every entry on the UB AP scam and as mentioned above it would make an interesting tale. Of course it would require a little less labourius reading and more screen shots with a dumbing down if you like for easy reading but maybe you should contemplate putting something together?