Last time out, I relayed screen grabs connected to the 2007 cheating incidents at Absolute Poker that confirmed the hypotheses that the primary cheater at AP was Scott Tom and that much of the information contained in official releases, even that issued by the KGC, was incorrect.

I also reported that while cheating accounts such as the infamous "PotRipper" and "doubledrag" were relatively new, the history of known cheating account "graycat" was much older, being an account controlled primarily by Scott Tom and dating back to the early days of AP itself. The following series of images shows the transfer history for the "graycat" account, presented in reverse chronological order, newest to oldest.

A thoughtful examination of this account shows that the cheating may have been the final stage of a much longer process of losing control. While the large transfers to fellow cheating accounts "payup" on 8/20/07 and "doubledrag" on 9/02/07 are further evidence of the interrelated nature of these accounts, they're far from the only curious transactions. One can presume, that the money transferred in came from some internal AP general-funds account, which makes the many in-transfers noted as "overlay reduction" seem odd: Why would an overlay reduction involve transferring funds from a general account into a private one, even one controlled by a top management player? (Update: one possible explanation has been offered by a blog commenter.)

Also curious is the single transaction marked as an affiliate transfer; it could certainly be a legitimate transaction, but its timing (during the 2007 WSOP) and solo nature could've raised at least a red flag to double-check for any accounting-style inquiries.

In any event, the images speak for themselves: 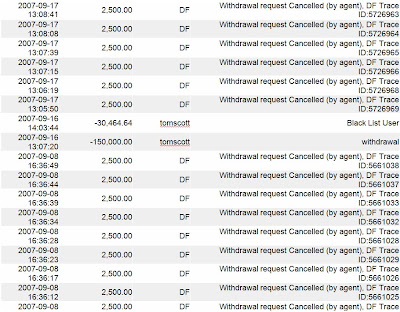 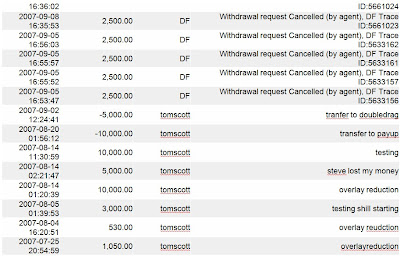 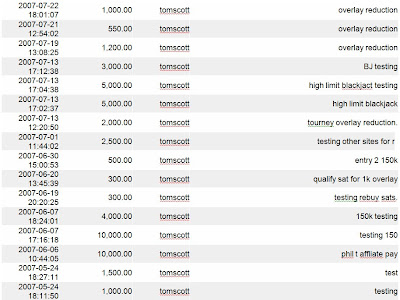 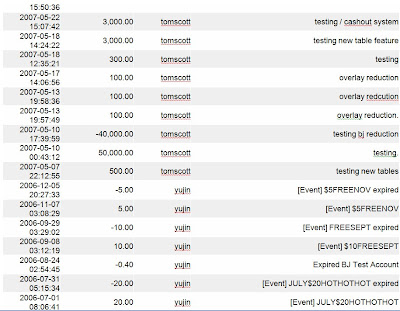 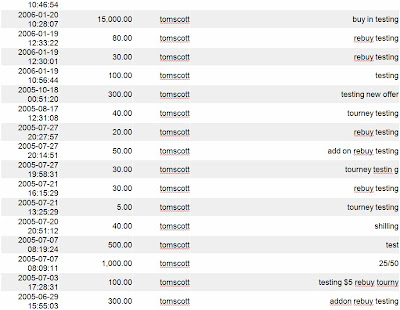 Is that Phil Tom affiliate pay, in any way link Phil to illicit activity?

Overlay reduction might mean AP transfered the funds to a players account for them to participate in a tournament that AP was going to have to cover the entry fee in anyways since it did not reach their guarantee.

I know someone who was a long time prop that would occasionally get buy ins to tournaments that didn't reach their guarantee.

The annotation technically says "Phil T", not "Phil Tom". While the two may be the same, we cannot reach that conclusion on the basis of only this piece of evidence.

Any thoughts to who Steve is for the "steve lost my money" comment?