In its official report of January 18th, 2008, the Kahnawake Gaming Commmission identified seven accounts that were connected to the online cheating at Absolute Poker during August and September of 2007. According to that report, these were the cheating accounts:

Each of these accounts, per the KGC's report, was directly and inextricably tied to the cheating through analysis of hand histories, including impossible win rates and blatant chip-dumping between the accounts. The problem, though, is that no outsider truly knows how much other cheating might have occurred. The KGC, elsewhere in the same report, admitted that other gaming logs had been intentionally destroyed.

Meanwhile, the vaunted ieSnare software program implemented by ieLogic at UltimateBet as an anti-fraud detection tool had also been in use at Absolute Poker. One aspect of ieSnare's capabilities, as it was represented to me, was shown in the first handful of screen grabs presented two posts back. Another was the program's capability to develop more complex inter-relational matrices between various accounts, and thus fine-tune the connections between these accounts. ieSnare's capabilities were highly touted in a number of industry pieces, and indeed, the software was an effective anti-fraud tool. 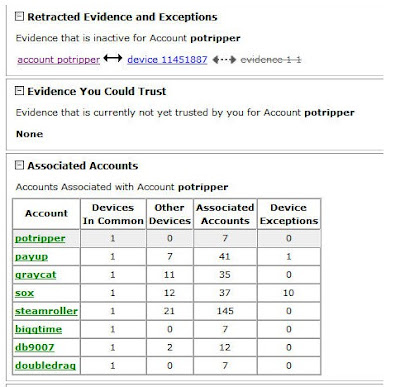 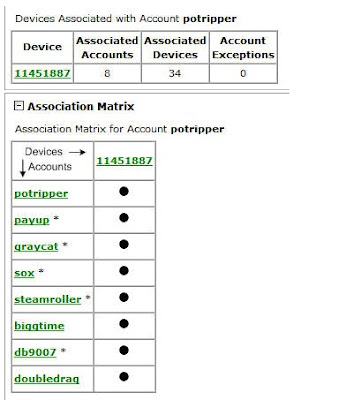 Clearly, those account names present in the PotRipper snare but absent from the KGC list would be the logical targets into any further investigations. (One additional account from the lengthy list below, "baller", shows a high correlation to each of the other known cheating accounts and should also be upgraded for additional scrutiny.)

The PotRipper account, however, had a very brief lifespan as an AP account, as previously shown in that earlier post. Another of the cheating accounts, "doubledrag", was similarly short-lived. By comparison, cheating accounts "graycat" and "steamroller" existed for much longer, and as a result, generated their own longer lists of associated devices and accounts when those screen names were similarly snared.

It's one of those open-ended questions one must ponder when considering candidates for other possible cheating accounts. The farther one chases down a given tree branch, the less likely any single link would be to be involved in the scandal, yet it seems first-level associations with known cheating accounts beg for more detailed investigation. That list is quite extensive, even if most or all of the new screen names presented below may turn out to be uninvolved in the cheating itself.

However, when one combines the direct device-usage correlations between PotRipper, PotChopper, graycat and steamroller against all directly associated accounts, as many as 147 other AP account screen names emerge. Showing complete imagery for all of these snares and screen names would kill this post's readability, but I'll upload the images for public scrutiny as opportunity arises. Here's a sample or two, though, to illustrate the snares' existence: 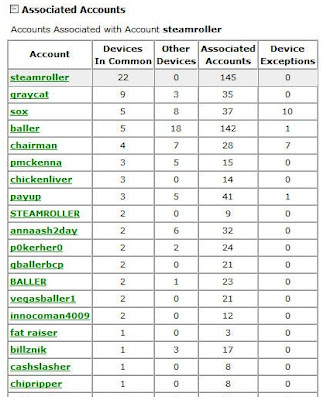 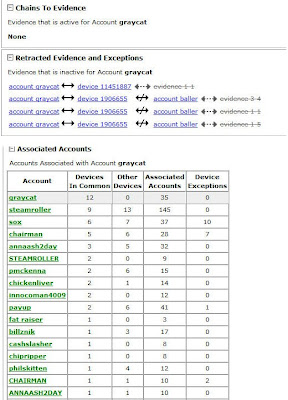 While many of these accounts were likely used for testing purposes, or are innocent altogether, it's possible that some among these may have had illicit use in either known or unknown cheating affairs or related chip-dumping, hence their inclusion here. The total list of accounts meriting examination is closer to 150 than 10, including both the screen names already acknowledged by the KGC and a handful of probable duplicates in this list, likely caused by system-data mismatches in processing capitalized and uncapitalized letters. With those duplicates accounted for and that original KGC list added in, it's around 145 or 150 screen names, all told. Readers can sift it if desired.

Again, note that the inclusion of a screen name on this list that follows does not necessarily mean that the account was used for cheating. One such account bearing special mention is the "chairman" entry, which has been alleged to me to be associated with Scott Tom's father, Phil, who has in turn been alleged to be a primary investor at AP's inception. The inclusion of such an account in the ieSnare may have been caused through something as simple as a log-on from a different computer, but the account was snared, nonetheless, in both lower-case and ALL CAPS versions. To repeat, inclusion here does not necessarily equal cheating; inclusion is merely an indicator of an account probably needing another look. Likewise, since two of the accounts acknowledged by the KGC to be involved (SUPERCARDM55 and ROMNALDO) are not on the combined list, the ongoing issue of still other accounts possibly used for chip-dumping remains an open question.

One also has to chuckle at the names made up in imitation of many well-known players or real-life people, including "negreanu", "jen harman", "dave barry", "lou kreiger", "ted forrest", "andy beal", "humberto." and "mikemizrachi". All fakes, to the best of my knowledge; these are not connected to the real players of similar name. Poor Lou, his name wasn't even spelled right, and I checked with him -- he's never played on AP anyway.

lita
its on!!!
up with ap!
apupgpdn
guinn

Awesome work and great analysis. Wish you could get the same stuff for ub accounts. Thanks for you continued effort