Here’s more visual evidence for those souls who still might not be convinced that Ben Mezrich’s new book, Straight Flush, is a gigantic literary fraud. As I’ve previously detailed, the book is a celebration of the criminal antics of the University of the Montana frat boys who oversaw the rise and fall of online-poker site Absolute Poker.

Swaths of Straight Flush‘s later pages are devoted by Mezrich to the propagation of the frat boys’ lies; namely, that they had no responsibility for the cheating scandal that wracked the site in 2007. Mezrich places AP founder Scott Tom on a pedestal and claims without any regard to the actual evidence that Tom was innocent of the cheating evidence that dogged him.

Previous posts in this series have shown how willingly Mezrich twists the timelines and falsifies the facts, rendering his style as less “mostly true” and more “not true at all”. A “true story” teller that can be shown to be a purveyor of lies ought to kick off a mainstream literary scandal, but only time will tell on that point. For today, there’s more of the hard visual evidence that firmly places Scott Tom as the ringleader of the insider cheating, through which millions of dollars were stolen from players.

Here’s the background: The infamous POTRIPPER tournament, lightly touched on in Straight Flush, was only one brief — albeit very blatant — instance of the cheating going on at Absolute Poker.  The final report on the cheating issued by the Kahnawake Gaming Commission (KGC) also identified several accounts that were used in cash-game cheating on the site, though it missed a couple that were used to shuffle money between cheating accounts, including POTCHOPPER, mentioned in a previous post.

Here is a timeline published by The Washington Post that includes a few high points of the AP cheating scandal as it was first understood.  It has a few of the details wrong, but it wasn’t that bad as a first mainstream try. The Post report, published on November 30, 2008, also included the official findings on the AP cheating as released by the KGC.

That KGC report was largely a whitewash, naming no one specifically due to the close involvement of former Kahnawake head Joe Norton with Absolute Poker. Still, they had to put in some facts, so they listed some of the other cheating accounts in addition to POTCHOPPER, including GRAYCAT, DOUBLEDRAG, STEAMROLLER and others, as noted in this series’ previous entry.

However, both Absolute Poker themselves and the KGC asserted that none of the money stolen from players ever left the site. This was a giant lie. Money indeed left the site and into the ePassporte account of Scott Tom.

The visual proof follows. These two images are transaction details for the GRAYCAT cheating account, which was both involved in the AP cheating directly and which also received transfers from other cheating accounts, in a manner similar to that employed by Russ Hamilton and others over at UltimateBet.

The GRAYCAT account was originally Phil Tom’s (Scott Tom’s father, and the Chairman of the Board of Absolute Poker), though the egoistic Phil preferred to play on his CHAIRMAN account. The GRAYCAT account itself was named for one of Phil Tom’s two pet kittens, which were imaginatively named Graycat and Blackcat, respectively.

Here is the transaction approval detail from Absolute Poker’s own internal security system for the GRAYCAT account, showing a key cashout from Absolute Poker to Scott Tom’s ePassporte account. (ePassporte was one of several e-wallets serving the gaming industry, and Tom’s full name is Scott Philip Tom.) The top three entries are the ones relevant to the cheating and the frantic coverup at AP in the wake of the POTRIPPER tourney; 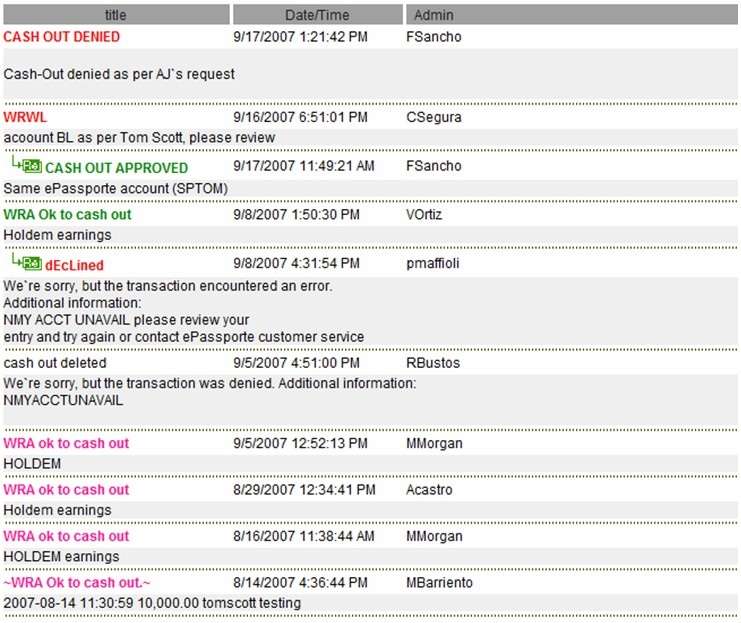 This detail, however, didn’t show the amount. To find out that it was a $150,000 cashout, and that the supposed cheater as blamed by Scott Tom himself — Allan Grimard, a/k/a “AJ Green” — wasn’t really the primary cheat, we also need the related GRAYCAT transfer-history detail: 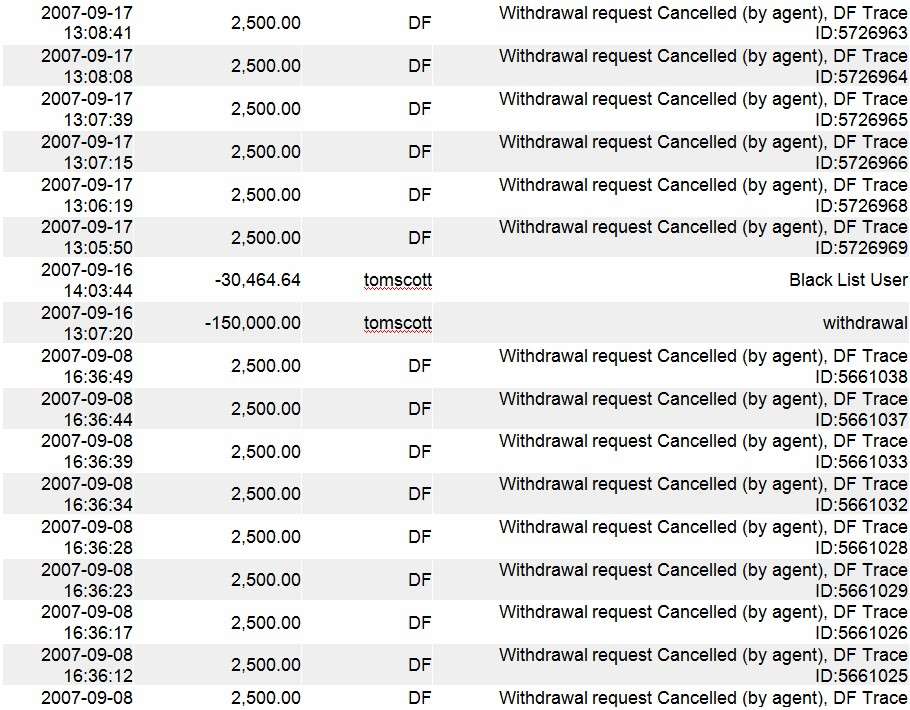 This clearly shows the two transactions being processed 9/16 and 9/17. The first and larger one, for $150,000, was forced through by Scott Tom himself, with the money moving into his own ePassporte account. Then a second smaller withdrawal was blocked by AJ, and the account was blacklisted, but only after most of the money had been removed. That money was still only a small portion of the $3 million lost in the jet accident, but was needed desperately by Scott Tom for some other purpose.

It all proves as a fraud Ben Mezrich’s published, grandiose lie of the “operations manager” (Grimard/Green) somehow screwing Scott Tom and the other AP founders. Bullshit. Scott Tom himself was the ringleader of the Absolute Poker cheating, and much of the site’s upper management was involved.

The AP bosses even munged the player-account information on GRAYCAT and the other cheating accounts, in a weak attempt to hide the nature of the cheating from the company’s own low-level employees. Here’s the overview for GRAYCAT:

The “Michael Edwards” email address is bogus and does not exist. The “Home Tel.” entry is actually Absolute Poker’s own 1-800 support number, to help identify this as an inside account, and the Address/City/Zip fields contain munged versions of the address of Phil Tom’s Seattle-area home, where Scott and the boys first developed the framework for AP. It is an inside account.

Now, the fun of it all. I first published these images three years ago, and they’ve been in the public domain ever since. These and other images were the basis of numerous major poker-industry news reports confirming Scott Tom’s involvement in the cheating. Those reports are the top entries for any Google searches including “Scott Tom” and “cheating” and simply couldn't have been overlooked by any writer — this means you, Ben Mezrich — doing any sort of legitimate research on the topic.

Instead, Mezrich chose to publish a book of lies, very likely accepting a large commission to accept the project. The truth about Straight Flush is that it's a disgusting, false slap in the face to all of Absolute Poker’s victims, those same people Mezrich now hopes to con into buying his worthless book.