Tuesday’s release of Ben Mezrich’s Straight Flush, the supposed “true story” of the University of Montana frat boys who founded Absolute Poker, represents a new nadir in the history of poker “story” books — that is, the recounting of real-life tales connected primarily to the poker world.

Poker has been blessed with a small handful of captivating inside-story tales, but this isn’t one of them: Straight Flush is an abomination of a book in virtually every way possible, a grandiose dissemination of lies and omissions that’s almost as criminal as the real actions of the out-of-control kids Mezrich attempts to deify.

Straight Flush is a $27.99 (hardcover)-priced bit of lightweight literary fraud undeserving of anyone’s purchase, and that’s the takeaway readers should remember. It takes the worst aspects of Mezrich’s writing style, wrapped around a falsified recasting of the company’s history in an attempt to generate reader empathy and envy.

The result is often tedious, a mixed rehashing of lame frat-boy escapades and gratuitous fantasies, not to mention stilted and often false dialogue suited more to a late-night infomercial than to a tell-all book  Fully half the book’s 300-plus pages are devoted to mindless “We were brothers” tales of drinking-do. Doing this attempts to shift focus from the book’s larger problems, including bald lies and logic holes so gigantic a private Sabreliner jet could fly through them.

Straight Flush offers as few facts as possible and disposes of those at the earliest convenience, all in the presumed hopes of offering a sexed-up version of an online poker crash-and-burn tale for Hollywood movie-rights sale.

This is, unfortunately, vintage Mezrich, who first achieved literary fame with the writing of Bringing Down the House, which was then transformed into the movie 21. Mezrich has long been accused of being fast and loose with the facts, and with regards to Straight Flush, there might be no Mezrich book looser, nor faster.

While it may be the equivalent of beating a newly deceased horse, the fraudulent nature of Straight Flush demands a literary dissection, so that readers can understand fully why this book is so very, very bad.

I’ll therefore undertake that dissection, and in a handful of short posts to follow, I’ll detail Mezrich’s authorial sins, which include numerous lies by omission and the intentional falsification of an important, scandal-related timeline, all done in a thin attempt to make this tale’s premise more empathetic and marketable. Following that, there’ll be a summation piece which includes comments from and links to other reviews, the vast majority of which have similarly panned Mezrich’s latest money grab.

Here’a a brief list of links to what will follow, including many of the largest literary sins within Straight Flush. Links will be activated as each new post is added, so check those bookmarks:

Part 3: The Biggest Lie about the Plane-Crash Story

Part 4: The Return of the Unnamed Low-Level Employee

Part 7: The Payment-Processing and Banking Falsifications

Seriously, eleven parts?  Yes, Straight Flush is that bad, that festering of a literary sore. So buckle up, bookmark this page, and check back often. 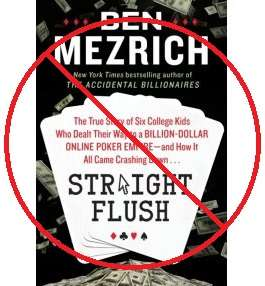