Just Conjecturin', Volume 41: The Episode in which I Discover I'd Moved to Afghanistan

I've been watching, with some interest, these recent developments regarding "Yukon" Brad Booth, amid the posting of links to a cryptic video by Booth on a prominent poker forum. What's Booth up to? I can't say for sure, though I am aware of tales from multiple channels that Booth had received one payment categorized as a "special refund" not too many months ago, and then a second payment didn't happen as promised. I've heard specific numbers in two instances, but both are lower than the $500,000 figure bandied about elsewhere. Nonethelss, all I've heard is hearsay, just secondhand stuff, and it might be true or might not.

I'd like to see Booth come out with whatever information he has. And shoot, Russ Hamilton can call me any time he wants to -- I'd be happy to talk with him. (Come to think of it, one of the Russ Hamilton records in the leaked UB records does have a phone number attached to it; I might have to check whether it's still good....)

Which brings us back, a bit more seriously, to the topic of those leaked UB files and a couple of the less useful fields included therein. These two fields are included only in records belonging to American UB players and contain misinformation designed to provide a false city/country combination to at least one third-party payment processor, among the several that were being used in the 2008-09 timeframe by parent company Absolute Poker. I'm revisiting this topic here just to put this little side tale to rest, since it doesn't have much to do with the cheating scandals, but is instead more an explanation of some of the corporate shenanigans poker sites had to do to keep the financial spigots open to and from their American players.

No one's yet confirmed the exact purpose for these two US-only fields, but the person most likely to be able to describe the fields' use is AP's Brent Beckley, and he's not talking much these days. We'll plow on ahead anyways. Deep in the records for each UB player, at some point in time after they'd been converted over to AP for Cereus Network use, two fields were added, showing this unlikely city/country combination. These did not appear on every US player's account among the records that were leaked late last year, but they were present on a majority of the roughly two million US records.

Sharp-eyed observers noticed that one of the Brent Beckley records I published last time out included two fields, "Sichuan" and "China", while two of the Russ Hamilton records in Vol. 39 carried similar field combinations of "Batna, Algeria" and "Obla, Ukraine". Here's how these fields appear when viewed in Excel: 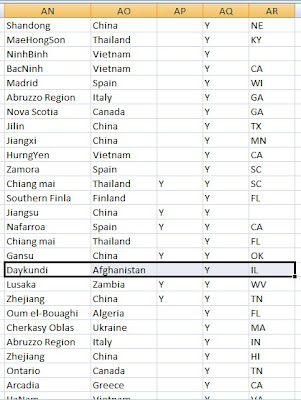 In case you're wondering, that's my record that's highlighted. So when did I move to Afghanistan? As you can probably guess, I didn't. Filtering this data shows that there were 125 of these highly improbable city/country combinations repeated over and over again, pasted into these two extra fields for each American player.

The fields seem to have been designed to not cause confusion with real city-country combinations that might appear. In addition to places like Algeria and China and Afghanistan where Absolute Poker had no (or very few) real cash customers, a few Western locales were mocked up as well, though these were munged to show something like "British Columbia, Canada", "Southern Finland, Finland" or "See Also, Italy".

It's all garbage, and clearly the result of a batch programming process designed to dump a made-up city and country combo into these two extra fields. The above image shows how the file appeared after the processing was done, though a copy of each player's real-life state of residence was also included a copy of fields further to the right. That "IL" entry, for example, is correct.

There are really only two possible explanations: It was either done to fool a specific payment processor, or it was done hand-in-hand with a favorite processor to provide false city/country info, the purpose being to fool a bank nearer in the processing chain to the actual customers. Most likely, this would be a major American bank serving as a funnel for EFTs and other payments. I tend to favor the "working-hand-in-hand-with-a-processor" answer, since the processors themselves shouldn't have been reprogramming any information received from AP.

Is it important in the tale of the scandals? Not really. It's just an interesting little diversion. What it does do is demonstrate the lengths to which AP and other sites had to go to continue servicing US players, post-UIGEA.
Posted by Haley at 1:25 PM