To clarify a couple of things for readers, the short piece on the corporate shenanigans of Absolute Poker appearing in the online Sunday version of Dagens Naeringsliv (dn.no) is not the major nuclear bomb against AP ownership that I referenced last time out. To view the longer and more important piece in its original entirety, you need to click on that link within the story linked above and fork over a kroner or three to DN. That longer piece appeared on Saturday and is the one really worth checking out.

A bit of backstory: DN reporters Goran Skallmo and Knut Like learned about a secret AP/Madeira Fjord board meeting being held in Toronto, and flew there to capture as much of the action as they could. In addition to a quote or two from the meeting's participants (perhaps captured unknowingly), the DN investigators also grabbed a handful of neat photos showing certain AP execs running around the office as this meeting was going on.

I have a couple of pretty good translations of the piece at this point, but for copyright reasons I can't do much more than offer brief excerpts here and there, though Goran has consented to allow me to run some of the pictures here. One of the key aspects of the DN piece is that a couple of Norwegian lawyers for the Norwegian law firm Bull & Co., particularly one Bjorn Blix, are now feeling some heat. From the piece:

Attorney Bjorn Blix rushes through the reception at the law firm of Bull & Co. During Madeira Fjords general shareholder meeting, he had refused to answer how much he and Bull & Co. has been paid by Madeira Fjord since 2008. There are millions. And officially Madeira Fjord has the no money. Then who pays Bull & Co.?

DN has been given access to informaton [that] shows that Bjorn Blix bills Madeira Fjord 3000 kroner per hour. Last fall Bull & Co. billed Madeira Fjord 550,000 dollars for one and a half months work. The payments came from several different banks in the U.S., Blix explains.

- Have Madeira Fjord accounts in the U.S.?
- No, no.
- But the transfer must show who the sender is?
- No, it does not, said Blix.
- So you simply do not know who has paid you for the assignment?
- No, says Blix and goes his way.

Lawyers are required to follow strict money laundering rules when they receive money from clients. They are supposed to know where the money comes from.

My educated prediction: More lawyers than Blix are about to be swatted.

Ah, well, on to a couple of photos. The first here is a shot of the frat boys outside their U of Montana Sigma Alpha Epsilon house, circa 2002. The unblurred faces, in order, are Scott Tom, Hilt Tatum IV, Brent Beckley and Garin Gustafson. Click on it for a larger view: 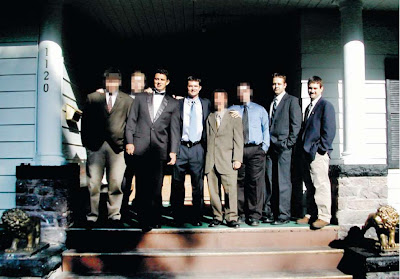 The second is a shot of chairman Ron Janusz, who doesn't own a lot of stock, per se, but is a long time friend of primary fundraiser Hilt Tatum III ("Hilt Sr.") and has served as a willing frontman for the company of late. I've heard his voice before, but had yet to match up the face: 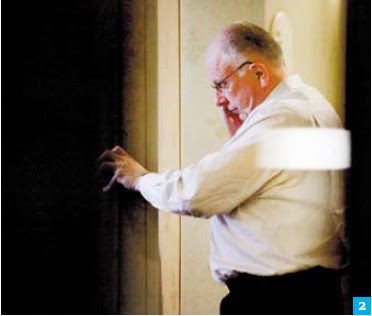 If you visit the detailed piece, it's apparent that the DN investigators literally shot some of these photos through eyeholes and slightly-ajar doors. Continuing kudos to Goran and his crew for revealing this important information regarding AP.

Update: An anonymous poster (see comments) claims that the person on the far right in the frat-house photo above isn't Garin Gustafson. Without the original it's hard to say for sure, though there's a tiny chance that the photo might be available in a University of Montana yearbook circa 2001 or 2002.

If it's indeed not Gustafson, as I believe it was identified to DN reporter Skaalmo and his crew, then the likeliest person for it to be is Shane Blackford, a rich trust-fund baby and fellow frat brother who was another of the original founders. Blackford also served a very recent turn as an executive board member.

Here's a blown-up version of the face on the right, along with those infamous wedding photos which included both Gustafson and Blackford: 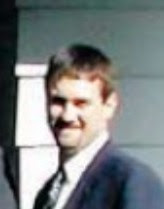 It still looks like Gustafson to me, though I suppose I could be argued the other way. Anyone have the original?
Posted by Haley at 5:57 AM

The person on the far right is not Garin Gustafson.

It isn't? Okay, I'll send an e-mail off to Goran at the Norwegian newspaper. Might be Shane Blackford then. There were more than four U of Montana alums involved.