Just Conjecturin', Volume 26: Who or What is Riviera, Ltd.?

Some new documents connected to the ongoing Excapsa/Cereus/AP legal maneuverings have popped up over on the wsbg.com liquidation site, and I'll return to the topic of Avione soon enough. Just note that business name for a bit; it's important. It is, however, just one important element in the net of shell companies surrounding all things Cereus. Today we'll post a bit on other matters, mostly because I already have this post largely written and I haven't published anything of note in a couple of weeks.

One of the difficulties I've encountered in researching various aspects of the scandals is deciding when to release certain pieces of information, balancing the information itself against the need or promise to protect many sources' identities. It's that which makes me agonize at times over releasing various items. I believe there will come a time when all can be told, but I also believe that patience in some matters is best, knowing that there are internal pressures afoot that continue to slowly force these entire stories into public view.

There are three dynamic groups presently battling over Cereus assets and control. Two of the three are aggrieved shareholder blocs -- one each on the Excapsa (UltimateBet) and Absolute Poker sides -- with the inner core group currently in control at AP euphemistically referred to as the "Toms and Tatums" (plus a few privileged others), which may now include a select few eWorld players who came along for the ride, post-acquisition. It seems clear that the power brokers at both companies left the rank-and-file shareholders grasping air back in late 2006, only to see the whole pyramid totter when the reverberations from the multiple cheating scandals came clear. The scandals combined with the UIGEA fallout left significantly less revenue to play with, leaving these various groups to fight for whatever was left.

I have many, many e-mails and anecdotes about certain people's involvement, but perhaps a bit of hard evidence is needed today as a change of pace. Both UB and AP were crafted in layered, obfuscating ways, and as indicated above, Cereus's structure today is another slathering of layers over the top of what previously existed, made even more obtuse by the recent paper sale to Antigua-based Blanca Games. The Blanca sale seems to have been put together in early July, a very rush-rush deal, perhaps precipated -- and this is my opinion only -- by Joe Norton no longer wanting to be tied to the Cereus stink. To think this is anything other than a shell sale designed to hide assets is folly. As one of my trusted friends wrote to me a few weeks back: "Re: stupid... Stuart Gordon is your knight in shining armor??"

Gordon has been alleged to me to be a friend of one of the AP frat boys, closely tied to the Costa Rica scene. 'Nuff said. (With apologies to Stan Lee, natch.)

Today, though, let's drift elsewhere. Before one can fully grasp the state of Cereus present, one needs to flesh out a better picture of Cereus past. The old bones are still there if you look in the right spots.

People may remember that when Nat, I and at least one other person honed in on the importance of the infamous "scott@rivieraltd.com" address in CrazyMarco's spreadsheet, the folks at AP seem to have gone into a panic to change things and cover them up. Mind you, this was late 2007 -- meaning the operational people who then set out to cover things up were the same people, by and large, who remain working at Cereus today.

I haven't gone back and pulled the chat logs and e-mails Nat Arem and I had, because by themselves they're of little importance. Without even looking at those, though, I can tell you that it was late the night of October 15, 2007 when the search got this breakthrough; I was on chat with him that night a couple of different times. I knew he had the greater tech capability and asked him to look closer at "rivieraltd.com," and Nat is the one who pinged the domain, did some other checking and found the direct link to the Mohawk server farm. Here's how Nat typed in his findings back then on 2+2:

Re: lolz super accountz
Wow, I just found something else that I think is huge. This whole thing could run reallllly deep.

Okay, so, the email of the 2nd guy (ie, NOT user 363) is at the domain "rivieraltd.com" -- that is the domain registered with Domain Discreet.

I don't know why I didn't think of this earlier, but I pinged rivieraltd.com to get the IP at which it is hosted (going to the website doesn't show anything except the email login). The IP address is 66.212.244.147.

Simple explanation for those who don't understand:

The guy who was on the same IP as the user 363 had his email set to an email that is hosted by Kahnawake Gaming Commission.

But that's not at all the story. What happened was that the uncovering and recognition of the rivieraltd.com domain seems to have set off a frantic coverup of both the domain itself and the people behind it. "They're changing things!" is how I remember Nat relaying this, even as 2+2 participants discussed the findings and their significance in this thread. Among other things, the whois for the domain ownership record was immediately changed, locked and sealed in such a way that these days I think it'd take a court order or action by government investigators to uncover it in its original form. The internet records show that it had swung over to October 16, 2007 as these changes started to be made, time calculated by whatever or wherever location officially tracks such matters.

However, the act of covering stuff up leaves its own distinctive footprint, much the way that using bleach to destroy a bloodstain gets rid of the DNA but tends to leave big bleachy residue stains where none ought to appear. The people responsible changed stuff repeatedly over the next several days, as shown by the historical whois, which simply notes the dates changes are made and which is public record: 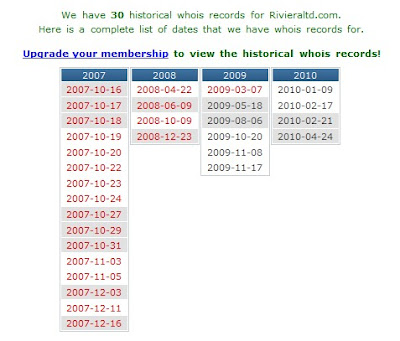 At least one change was made to the site each day on those shown above, all starting on October 16, when the corporate coverup shifted into panic mode. Note that the above screen only shows those days when changes were made; in all likelihood, multiple changes to the records were made on one or more of those days as well.

The rivieraltd.com domain, in case you're wondering, was created in February of 2007, and it was at the time of its public outing a gateway to a mail server. Rivieraltd.com, in addition to whatever role it had/has, seems to have been the mail hub of choice for AP executives, managers, owners, etc., and I'm in possession of several e-mails showing AP VIPs using rivieraltd.com addresses for corporate matters. I choose not to publish these at this time, for multiple reasons, but may in the near future.

Still, the rivieraltd.com domain remains interesting, and it is still associated with AP and Cereus today. Soon after the discovery of its connection to Absolute Poker, the domain information was changed and blocked. However, either the information has been changed again, or the company just got lazy about keeping the information hidden between some registrar's anonymous hosting service. Today a public view of rivieraltd.com is again visible, though surfing to the site itself shows nothing but air: 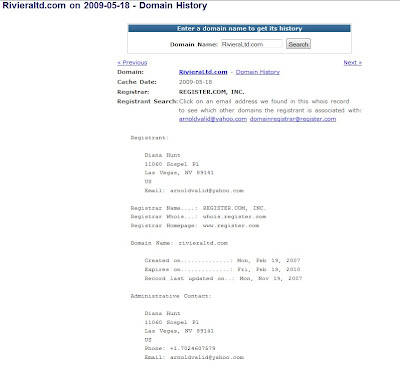 The listed registrant, Diana Hunt, is a confirmed AP shareholder. More importantly, she has multiple connections to the inner ownership group, being another U of Montana graduate, and she's spent time in Las Vegas, Portland and elsewhere. She has (or has had in the past) connections on social networking sites with other AP notables, and is reputed to be close friends with Tom Wenz, who is also an AP shareholder and currently believed to be #3 in Cereus's present chain of command.
Posted by Haley at 11:53 AM

Found a link to this post earlier today on Tao of Poker, then spent the next couple of hours reading all 26 entries.
Looking forward to reading the rest of this "series", and I hope you (and anyone else working on uncovering the truth) are able to reveal the names of all those involved.

I still can't believe people play on UB and AP, including some high stakes regulars on other sites.

The entire company is a cancer and needs players need to vote with their feet and simply not play there, let it go completely busto and disappear forever. Hellmuth might fuck off then too

Truly amazing work!! I'm going crazy
with this 2 week hiatus. These people need to suffer ten fold. It's very uplifting to see that there are good hearted people who won't give up the fight to make sure evil doesn't prevail here. The outcome alone will be enough reward in itself