Every once in a while the news peppers us with one of those feel-good stories about a cat that goes off on unintended journey of thousands of miles, hitching a ride in an airplane's cargo hold or climbing up inside a nice, warm engine compartment of an auto, only to wake up and start mewling a couple of time zones away.

Famed Absolute Poker house cheating account Greycat did that, too, seemingly, as did PotRipper. Since they'd resurfaced in different form in a recent thread on 2+2, I wanted to return to some of the information I first published regarding Graycat, Potripper, Doubledrag and the other cheating accounts, as published back in Conjecturin' 11 and 15. These images verify what's recently been published there.

Again, here's part of how Graycat traveled throughout Latin America and the Caribbean during the main cheating period. Clicking on them shows the larger version: 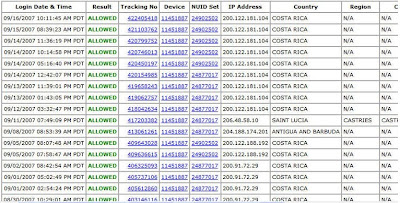 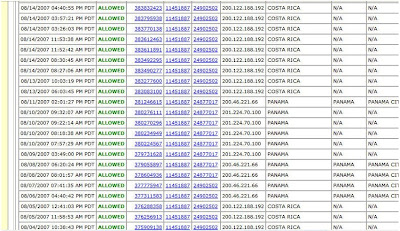 And here's similar for PotRipper:

Now, I can't yet find the related posts, but when the story first broke and AP peddled their original cover-up press releases, one of the tales being floated about supposed mastermind AJ Green (Alan Grimard) was that he was house-sitting at Scott Tom's Costa Rica house, thereby also attempting to explain away how the key IP residence was traced to Tom's residential address. If someone can point me to those posts or has reason to correct my memory, please contact me and I'll be happy to add it in here.

As with AP's claim about no cheating funds ever leaving the site, the evidence suggests the contrary about the whole "house sitting" tale. The reports I've heard are that AJ was one of the high-level office/operations managers, not the one doing all the traveling (even if he did some), though if an Interpol-type investigation ever dug into those Castries, St. Lucia resort registrations for the period in question, we'd know for sure, not that that's likely to happen. There aren't a lot of hotels and such there, just three or four, the largest of which seems to be the Sandals Regency complex.

About AJ Green: While it seems as though several top-level AP people were involved with participating and/or covering up the AP cheating shenanigans, AJ stands out because he's not a shareholder, to the best of my knowledge. That made him the logical choice to take the public heat, since when the fire's big enough, someone always has to get burned. There's a reasonable chance that he was paid a good chunk for doing so and was shuffled off to a parallel position with another AP division or connected company, perhaps also alleviating some of the antagonism between AJ and Costa Rican office statements that also surfaced at the time. Statements that I have received support the possibility that AJ, as with Scott Tom, remains firmly ensconced within the AP/Cereus family and related operations.

Graycat, as previously shown in this post, was an AP house account. It was originally Phil Tom's account, though Scott Tom has been reported to have used it at length as well. Phil had (perhaps still has) two cats, a gray one and a black one. They were named Graycat and Blackcat, respectively. Queue up the mouse jokes, everyone.
Posted by Haley at 10:04 AM