A wild day and long night at Poker Base Haley, that's for sure.

Saturday's unplanned poker marathon began with a handful of SNGs at Poker.com, waiting for the big event of the day --- the Poker.com Blogger Poker Tour Championship --- to begin. To say I was pumped for the event would be a disappointment; to say I played well would be a clear misstatement. I went out just as the blinds became bothersome, and my KK was trapped by a set. Rock and a hard spot. I Go Home Now.

My sincere congratulations go out to all the winners... and indeed to all the qualifiers, just for being part of the fun. I see Ohio Mike has a nice writeup already, and I'm sure others are out there, too. And again, I'd like to thank Poker.com for running this promotion, It's just one of many reasons that they've earned my continuing business, and why I finally decided to take the plunge and put up the banner over on the left, despite my staunch independence on most matters. They've been good to me, and I recommend them to others as well.

As for me, I had that emptiness inside that a big disappointment so often brings. I logged off for a while, had a beer, and had a couple of nearby friends join me to sit outside and watch this suburb's July 4th 1st fireworks... literally across the street. It was a fun if unordinary suburban display, accompanied by the standard background wail of frightened babies and agitated car alarms. Being accosted by two young Mormon women doing their missionarily duties, as I sat under a tree waiting for my friends, was just a bonus.

Back inside, I fired up two or three sites, including Mansion Poker. A couple of weeks ago, I'd told the KAP guys that I'd look stuff over and do a review of sorts on it for them --- even if sometimes my reviews aren't necessarily the type of commentary best suited for KAP's business and affiliate-link stuff. You need only look at my recent experiences with Bodog to understand why I choose to remain as independent as I do. Rest assured that you won't be seeing any Bodog banners here.

As for Mansion Poker, KAP and I have like-minded interests --- seeing how Mansion's unique promotions work, checking out the site's traffic, getting a feel for the software. They have some nice value-added tourneys, though my first two tries at the PokerDome thing were beyond frustrating. In both cases the entire Mansion system crashed --- the second wasting a good two hours of my play --- and when they finally got the system up and running, the PokerDome qualifiers I'd been in had been wiped from the board. Trust me, I really do not care about the one-penny entry fee, but investing hours in something that didn't run to fruition was a bad use of even this nickel-and-dimer's time. Per a response I received from Mansion's customer support (and they were prompt in their replies), a new series of freerolls for a British newspaper had repeatedly stressed some system and server capabilities. Here's hoping they've fixed the problems; judging from the numbers Jen Leo reported in her fun tale, traffic has tripled or better in the last couple of weeks. Despite that, with 388 runners and a promotional prize valued at $7,000 and the chance to swing at those big bucks, it's still a monster value.

But I still needed to play one of these PokerDome things to completion, for the sake of writing a first-person-experience post, if nothing else. And when I fired up the software, there was another Dome qualifier only minutes from starting.

Here's my penny, Mansion. Let's fire it up and try again. 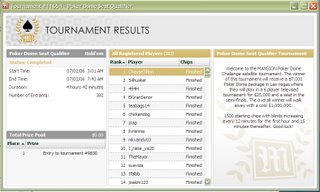 I'll offer some of the highights in a bit, in one of these here forii where I post. Right now the Mansion software seems to indicate that I'll be on the July 29th taping, and I haven't received any followup yet. All I can say is that I was way calm when we reached the final table. I knew I was going to take the thing down, and I then had a run of cards that basically wrecked that final nine... including KK and AA twice each, all holding up. In the end, I was just mopping up the pieces.

I'm beat today, after two tough tourneys. I'm busy in a couple of last-gasp chances to earn enough scratch to get to Vegas for the blogger festivities, longer shot though it seems to be. It looks like I'll now be making a wonderful trip anyway --- thank you, Mansion Poker! --- but I'd still like to do the other as well.
Posted by Haley at 2:41 PM

Thanks, you two! The guys at KAP wanted a more detailed story so I put it up over there --- it's at kickasspoker.blogspot.com